Here Luca and Brolly have been painted in their designated colours. This time I used acrylic paints. They may have been of an inferior quality. Currently I'm no big fan of acrylics is all I can say. 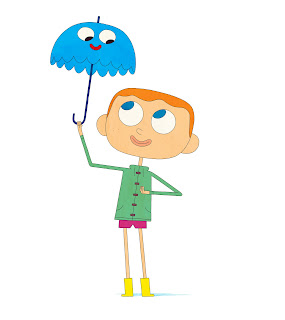 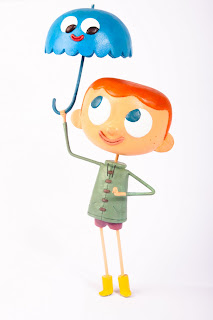 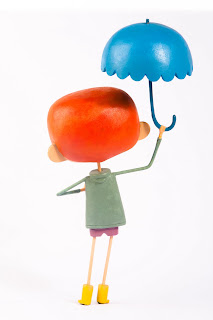 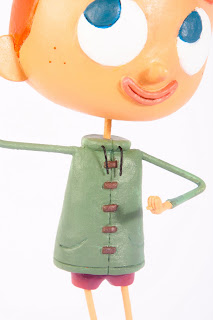 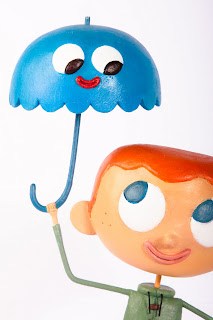 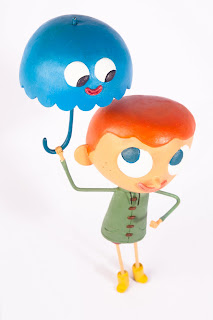 When I had finished baking Luca's head, it had cracked a bit in spite of the cork inside (go figure)
I quickly filled the gaps with green stuff.

Then I sanded the entire marquette. The bare metal on the arms and legs etc. also had to be sanded down as they'd recieved some marks after being bent into shape.

The removable joints were covered in green stuff for shock absorption purposes. 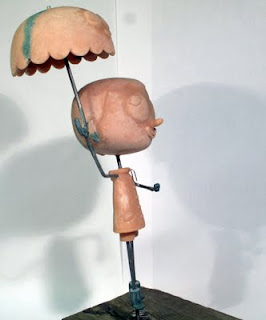 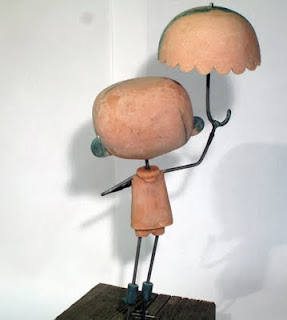 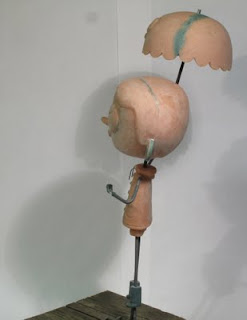 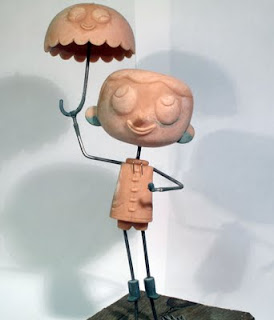 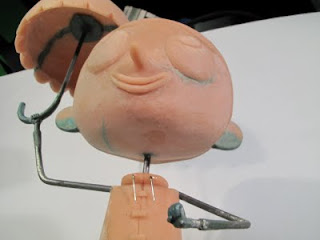 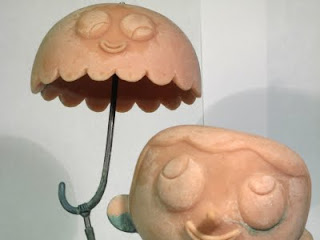 The colour scheme for the ronin was pretty straight foreward. I once again took my inspiration from Frank Miller's Ronin and decided to stick to what was represented in the graphic novel. I added my own twists here and there. 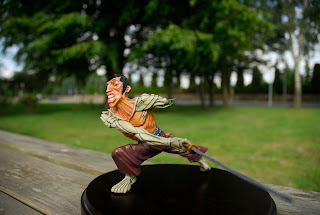 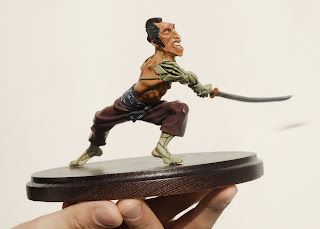 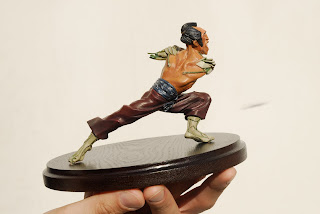 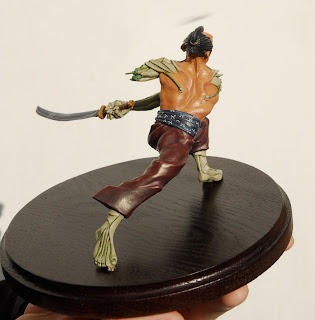 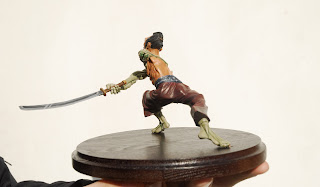 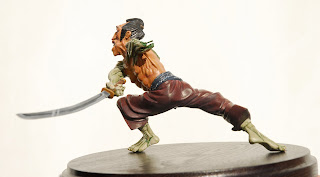 the robot parts had too look as dead as the skin looked alive. therefore I chose an oveall green palette for the limbs as an opposition to the red palette of the skin and clothes. The pattern on the sash draws atttention to the sculpture as a whole. It is a focus point for the eye. 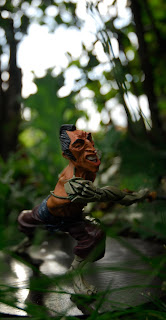 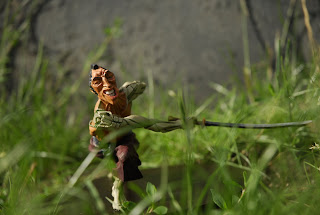 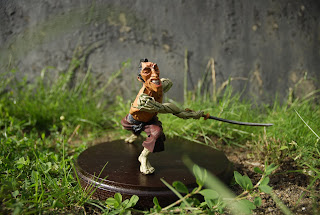 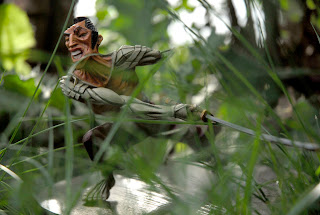 As the concept sketches were already done, I had the pleasure of not being able to cut corners when it came to the finished pieces. In other words I'd have to shape up and fly straight, if the project was to be approved by my employer.

Contrary to what I'd initially feared, I enjoyed working under these conditions as I was forced to solve problems rather than ignore them. It added some spice to my work ethics. 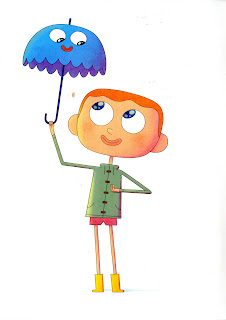 I was given the concept sketches with the correct measurements and then I set to work. As the limbs on Luca were quite slim and his head quite large, it was decided that the head would have to be skulpted around a base of cork. Cork is good for filling out large shapes in a Sculpy model as it is lightweight and keeps its shape and size when heated. This prevents the sculpy from cracking up.

I decided, as the limbs on Luca were so slim, I would not cover the metal skeleton in a layer of sculpy, but simply paint it over once Luca was finished.

I did Brolly's head in three stages:

Firstly I created a mould for the head in sculpy to get the shape and size correct. When I had baked it, I carved and sanded it into a shape I was happy with.

I then proceeded to skulpt half the head i.e. the face onto the mould, then bake it for 5 minutes. Just enough to make the surface hard.

Then I sculpted the back of the head onto the mould and the face and gave that the same treatment. This way I could shape the joint for the back of the head to fit with the face part. I baked both pieces for an additional ten minutes and then connected them with glue and greens stuff. phew 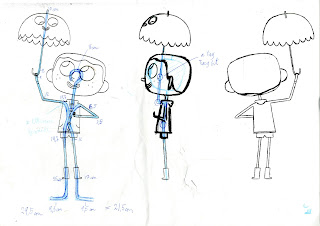 All the planning and positioning was done prior to sculpting.

Here we see how I planned the skeleton to be positioned inside Luca and Brolly. Notice that Brolly and Luca are connected in one piece of wire. I saw no reason to do them seperately. Luca's head I had to do seperately though, as it was too cumbersome to do when attached to the body. Brolly's umbrella head would also have to be detachable from the main piece for the same reason.

In this way it would be immensly easier too transport them.

The hands and feet were done in green stuff after the sculpy body had been baked.
Indsendt af Morten Lassen kl. 23.17 Ingen kommentarer:

I was hired to do some marquettes (sculptures) a couple of months back for a nice woman named Sara Barbas. She was among six people chosen to pitch an idea at Annecy in France. She pitched the idea for an animated series by the name of Oddsockshire. 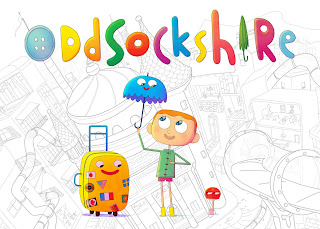 Being a former sculptor at Aardmann in Bristol UK, she wanted to make some marquettes for her presentation, but didn't have time to do them herself. Luckily I was available to do them, so under her close scrutiny I set about recreating the designs she'd had made. She wanted me to do three marquettes: